Loved by gals and hero-worshipped by guys, James Bond is the ultimate in British gentlemanly charm. But knowing that he prefers his Martini shaken and not stirred isn’t even scratching the surface as far as 007 trivia is concerned.

And so, the next time you’re off to trivia night, consider first familiarising yourself with our list of fun facts about 007 you probably never knew.

Bond is a man of many colours – and that includes being a professional crime-busting killing machine. As for the deadliest Bond ever portrayed, American Irish actor Pierce Brosnan outperformed them all. In Goldeneye alone he ended nearly 50 lives (forty-seven for those who were counting). And on the other side of the spectrum we’ve got Roger Moore in The Man with the Golden Gun. At only one person killed throughout the entire film, The Man with the Golden Gun is the Bond film with the lowest body-count of them all.

The making and filming of the 1997 James Bond smash hit Tomorrow Never Dies saw at least 15 BMW 750s destroyed. All in the name of Her Majesty’s Secret Service of course. But that’s not even the worst of it yet because during the making of Spectre (2015), producers ran up a bill of at least £24 million on soon-to-be-trashed specially designed Aston Martin DB10s alone. That’s 7 multi-million-pound speciality sports cars destroyed in the making of a single movie. And whilst on the topic of Spectre, the title just so happens to be an anagram for ‘Special Executive for Counter-Intelligence, Terrorism, Revenge and Extortion’. 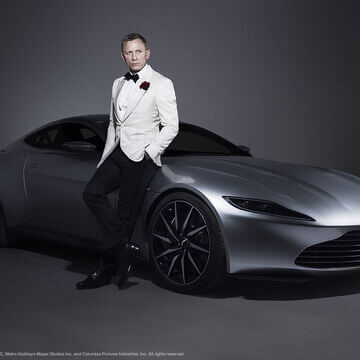 Daniel Craig was handed 85 identical Tom Ford suits for the making of the opening scene of Skyfall alone. Also, it’s probably best not to end up on the wrong side of the actor knowing that he’s blasted through at least 200,000 rounds of ammunition during weapons training in preparation for his role in Skyfall.

In Ian Fleming’s original 007 novels, James Bond became agent 007 at the age of 38. Incidentally, out of all the actors to have played the world’s best-known special agent of all time, Daniel Craig is the only Bond to have earned his special agent 00 status at the same age. Daniel Craig is also the first actor to have played James Bond whose birth post-dated the birth of the series.

About That Man Ian

Ian Fleming used a golden royal typewriter when he wrote his famous series of spy novels. The famous English writer wrote a total of 12 James Bond novels as well as several short stories and quips about the special agent spy.

Interesting too is that Ian Fleming, having moved into a full-time 007 writing career, served as a naval intelligence officer, which career without a doubt contributed to the very character of the series. And as for the name of his special agent 007? Fleming is said to have taken the name for his character from that of American ornithologist James Bond, a name he later revealed had struck him as particularly “mundane”.